Nugatory Basin, on a baseboard just 4’-2” long and 1’-3” wide is an attempt to model in 7mm scale a small narrow gauge railway yard. The location depicted is fictitious; the imagined site has a canal basin, interchange warehouse and a paint factory.

The track plan is basically half of a loop with three sidings, the out of sight other half of the loop being a sector plate in a fiddle yard. The trains are short; just a loco and two goods vehicles, with an occasional workmen’s coach. A vertical boiler engine normally shunts the yard. 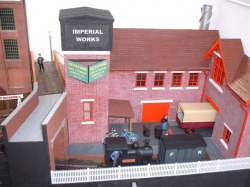 Buildings have been inspired by prototypes mostly at Ironbridge and are all scratch built from cardboard with embossed plastic card or Linka moulded brickwork The baseboard has switch clusters and controller sockets at both back and front making it ideal for operation either at an Exhibition or at home on the kitchen worktop.