Iceni Cement marks the return of this modeller to 4mm scale OO gauge after a break of several years.


The inspiration came several years earlier from an article in the Model Railway Journal Compendium issue titled “Bucolic Silos.” The silo is drawn closely from the one in this article. The location, for the model, exists. It is a short distance from Portman Road in Ipswich. Though this never had a railway, it did have a cement depot and is next to the Alderman Canal. A short lived line ended some six hundred yards short.

Operation is simple. Full in and empty out. The cement depot receives bulk loads and bags. These are transhipped to road vehicles for onward distribution. There is a small coal depot on the same site. This provides a variety of traffic and due to the layout of the plan operation.

Operation is dice based, these being used to simply determine the traffic on and off the layout. Rolling stock is kit built and the motive power is provided by Bachmann in the form of a locally numbered 08 diesel shunter.

The layout was built to show what can be achieved in a very limited space, whilst maintaining operating interest. The layout folds to make transport and storage as easy as possible, as such it fully demonstrates the WRG motto: “Layouts You Can Live With!” 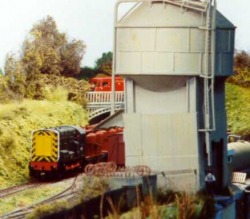